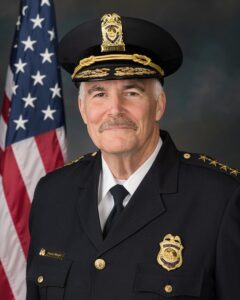 After 42 years in policing, including for two of the largest police agencies in the National Capital Region, J. Thomas Manger had retired and was enjoying his life as a security consultant and public citizen. Then on January 6, thousands of white extremists — incited by former President Donald Trump and his minions — breached the U.S. Capitol, vandalizing the building and grounds, threatening the lives of members of Congress, of Vice President Mike Pence and his family, and mercilessly heckling, beaing, tear gassing, and injuring hundreds of ill-equipped and vastly outnumbered U.S. Capitol Police.

Manger watched the events unfolding on TV, horrified and near tears as the rioters roamed freely across the Capitol, hanging nooses, taking selfies, shattering windows, breaking doors and assaulting cops, in a ruthless challenge to democracy.

When Manger was invited to become the new police chief, he was reluctant to leave retirement behind. But haunted by the January 6 images, he couldn’t  turn down the call of duty.

Sworn in on July 23rd, Chief Manger is a little more than a month into his job and confronting some of the biggest challenges of his long and distinguished career. His 1800 rank and file sworn officers are still struggling to absorb and recover from the magnitude of those violent attacks. Hundreds are recovering from their injuries and are emotionally traumatized, scores have already left the force, and then there are the memories of two of their own who lost their lives to a stroke and to suicide after the insurrection. Put simply, many officers are experiencing a crisis of confidence in their leadership like never before.

Can Tom Manger fix it?