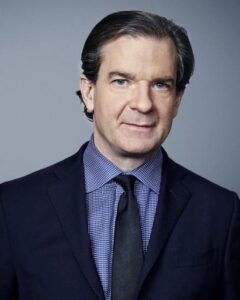 Ep. 57 — The Journalist and Author who Predicted the Rise of Osama bin Laden and al Qaeda Examines the Legacy of the 9/11 Mastermind and the Global Jihad that he Spawned / Peter Bergen, CNN National Security Analyst & Author, “The Rise and Fall of Osama bin Laden.”

In 1983, a British university student named Peter Bergen traveled to Pakistan with two friends to make a documentary called Refugees of Faith, about the Afghan refugees fleeing the Soviet invasion of their country.

Little did he know it at the time. But that trip would be the first of many and one of the most consequential in Bergen’s life. It led to a nearly four-decade body of work documenting the rise and fall of 9/11 mastermind Osama bin Laden, his group al Qaeda, and the global jihad they spawned, rooted in Afghanistan.

Today, as we approach the 20th anniversary of the 9/11 attacks, and against the backdrop of the disastrous U.S. pull out of Afghanistan, I have as my guest, CNN National Security Analyst Peter Bergen, here to reflect on bin Laden’s legacy.

Bergen produced the first television interview of bin Laden in 1997, aired on CNN. And he was the only journalist to visit the Abbottabad, Pakistan, compound where bin Laden was killed, in a 2011 raid by U.S. Navy Seals. The building was later demolished.

The author of nine books including six on bin Laden, Bergen has a fascinating new biography of the terrorist, titled, “The Rise and Fall of Osama bin Laden.” The new biography is based on Bergen’s body of work, plus thousands of documents, journals, and other materials seized in the Abbottabad raid, along with hundreds of interviews — including with many in bin Laden’s inner circle.

Using these documents, Bergen paints an intimate portrait of the terrorist in isolation in the final months, weeks, and days before he was killed by U.S. Navy Seals. In a 228-page family journal, bin Laden looks back on his global jihad revolution, concerned that his legacy and that of al Qaeda’s will be lost in the peaceful Arab Spring revolution in the Middle East. Bin Laden and his family worry that he had waited too long to speak and that he was becoming irrelevant. And he was worried about the al Qaeda brand being tarnished by the killings of Muslim civilians by groups such as ISIS.

For these and more fascinating details about bin Laden’s final days, what Bergen calls, “bin Laden unplugged,” do tune in to this riveting episode.